It’s sad to see a long-standing icon in an industry on its way down. Kodak may shortly be seeing an end to its era, or at least in its current state. During its heyday, Kodak was considered as the brand synonymous to everything that has got to do with photography and still pictures. I for one have managed to get through shed loads of Kodak film (EPR, EPP, and Tri-X mostly) before becoming a loyal follower of Fuji – call me a philistine, but I was never a huge fan of Kodak to be honest, although I acknowledge the company’s importance in developing the industry and introducing Kodachrome (in spite of the hassles of having to send the film away in its trusty envelope).

How such dominance managed to ultimately fail will be the subject of discussion for many years, but maybe Kodak just couldn’t keep up in the face of such rapid changes in technology and consumer taste. In 1985, Polaroid won a huge victory against Kodak in federal court. A judge ruled that Kodak had violated Polaroid’s patents for instant photography. The decision ended a nine-year legal struggle between the two photography giants and in 1991, Polaroid was awarded $925 million. In addition, Kodak was forced to replace all its instant cameras with Polaroid cameras or reimburse the consumer at $50 per camera. For nearly 50 years, Polaroid had built and dominated a worldwide market for instant photography. But digital photography dealt the company a blow from which it could not recover and in 2001, it too filed for bankruptcy.

The changing economic times, as well as technology, may have spurred a change of direction that the company has not prepared itself for. After several years of trying to regain what may be left of its old glory via CD production, its own range of digital SLR’s and huge investment in CCD’s Kodak may finally be on the verge of the closing shop as it files for Chapter 11 bankruptcy protection.

But all is not over yet for the Eastman Kodak Co. as it still tries to survive an operation. After all, a company that has been around for around 131 years may have hope yet. It is still in the market and trying to source out bank financing to keep it afloat. It is also making efforts to put up its patent portfolio for sale for interested parties. It is said that the preparations for Chapter 11 filing is just an option that they can consider in case the current plan does not succeed as the company expected.

But still, it’s quite a reversal of fortune for a company that was once considered as a leader in its industry. The photography pioneer led with a number of innovations that made them the top company in the industry for several years. 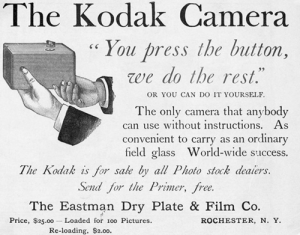 Kodak, whose slogan “You press the button, we do the rest”, was once considered as the source of innovation that pushed the field of photography to new heights.

There also seems to be a twinge of irony in this story, in that it was Kodak that first invented the digital camera in 1975.  And it’s quite unthinkable that the company was not able to take advantage of the technology that has since become the accepted standard in photography today. Film photography has faded in terms of popularity over the years, a standard that Kodak still tries to stick with. Not being able to follow the current trend may have led to the revered company’s eventual downfall.

Hours after Kodak announced it was seeking bankruptcy protection, the Rochester-based imaging company was quick to reaffirm that its film division will survive the company’s restructuring as long as it remains profitable. 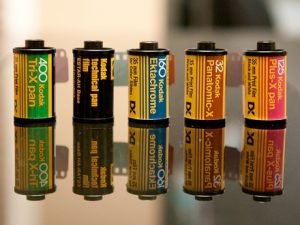 “Film (still and cinema) remains a profitable business for Kodak, and we have the broadest and most respected portfolio of films in both segments,” Audrey Jonckheer, Kodak’s worldwide director of marketing and public relations, told the BJP. “We have taken steps to sustain the business as it has declined, and we know that there are hundreds of passionate fans of film for the artistic and quality reasons they cite.” Now I’m not party to the figures involved here, but I’d suggest that hundreds may not be enough. At best, film photography will be a niche market – I for one hope to see it continue (nostalgia maybe?) but for commercial use (include press and editorial in that too) both photographers and clients are used to the speed and convenience of digital and in this fast paced shoot’n’share world we live in, I doubt whether it would realistic to see it used commercially very often.

If Apple is successful in establishing ownership over any of the patents Kodak has asserted against Apple and others, or licensed under agreements with other competitors, Kodak’s last-ditch effort to gain value from its patent portfolio going into a bankruptcy restructuring plan could be severely hindered. Although a judge has already “approved initial availability of $650 million” in financing for Kodak, there will be more to hear at the first court date for bankruptcy hearings on February 15th.

Bloomberg is reporting that Kodak is trying to receive more than $1 billion in royalty payments from Apple and RIM. The patent involved has to do with previewing an image on a camera phone.

Chairman and CEO Antonio Perez stated that Kodak “deserves to win” and there is “a lot of money, big money”. Kodak has won a similar case against Samsung and LG previously for the same patent bringing in nearly $1 billion.

But given that Apple allegedly has over $100 Billion in the bank, it may turn out that if Apple should win or lose, Kodak’s patents and perhaps its whole digital division will be bought up by Apple, the new leader in consumer imaging.

Maybe that’s a good thing – it might just save the Kodak brand for ever. We’ll see.

With thanks to BJP, The Verge, New York Times, Kodak & Polaroid.
0 Shares